The nickname ‘ice’ became famous due to the drug’s appearance of white little ‘crystals’ and glass-like display.

The ASF (Airport Security Force) has seized 1.5kg of ice from a Bahrain-bound passenger at Allama Iqbal International Airport (LHE) on Friday.

According to details disclosed by ARY News, the man was going to Bahrain from Allama Iqbal International Airport (LHE), where he was detected with the drugs by the ASF staff. 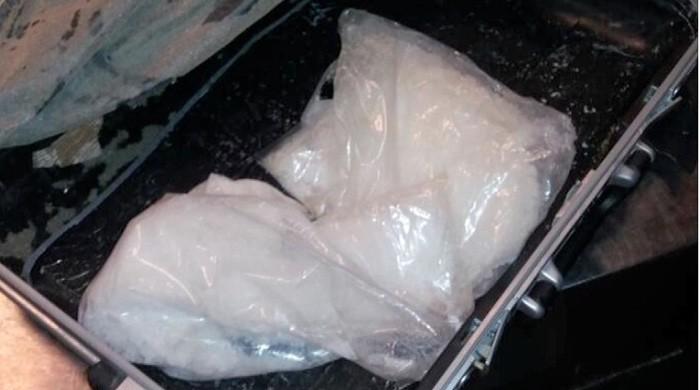 The ice was hidden in a trolly bag the suspect was carrying.

The defendant has been taken into custody and further investigation into the matter is underway.

‘Ice’, or ‘crystal methamphetamine’, is a polymerized stimulant drug variant. Methamphetamine itself typically comes in three different models (ice, base, and speed) that differ in appearance and strength.

Crystal methamphetamine is one of the most powerful varieties of the drug and is normally colorless and scentless.

The nickname ‘ice’ became famous due to the drug’s appearance of white little ‘crystals’ and glass-like display.

It was revealed that nine packets stuffed with the contraband medicines, weighing over 8.5 kilograms, were retrieved from the baggage of the travelers departing for Jeddah.

A case had been filed against the women.