The MV Heng Tong has been stuck on the shores of Karachi's beach for the last several days. 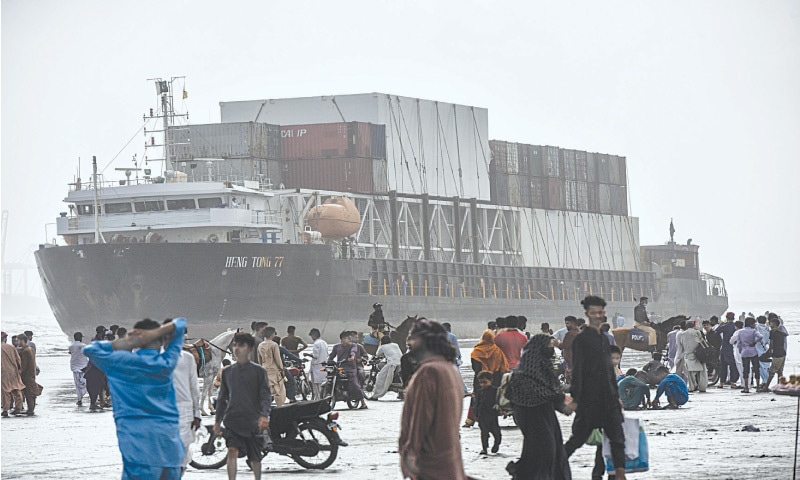 The cargo motor vessel stuck on Karachi’s Seaview beach shores will not be able to move before the 15th of August.

The MV Heng Tong 77 got stuck on the shores of Karachi’s Seaview beach a few days ago due to poor weather.

The ship, owned by a Hong Kong-based cargo company, is 98 meters in length and 20 meters wide.

The ship was travelling to İstanbul (Turkey) from Shanghai (China) when the unfortunate incident happened.

This was revealed by the Special Assistant to the Prime Minister on Maritime Affairs, Mehmood Moulvi, during a press conference on Monday.

The Federal Minister for Maritime Affairs, Ali Haider Zaidi, was also present at the press conference.

Moulvi revealed that the authorities concerned would have to siphon off the ship’s oil before it could be moved.

He also said that the vessel will be moved around the 15th of August.
3/4 @MoulviMahmood pic.twitter.com/Oy8r9G94vo

He added that the rescue work was halted earlier due to the port’s closure during the Eid holidays.

Moreover, it was disclosed that the water had already entered the ship when the rescue team initially reached near the vessel to help it move, and the ship’s engine was labeled as “too weak” to work.

Am quarantined due to #COVID19 with high fever & other symptoms. But I’m not dead as yet.
Therefore, have been monitoring all plans to rescue to stuck vessel.
Firstly, request all to not waste time on the rubbish being floated on media & by some self proclaimed shipping experts pic.twitter.com/cCoLFlx2Ax

On the other hand, the captain of the cargo ship rejected the statements made by the Federal Minister Ali Zaidi.

In a conversation with Geo News, the captain claimed that he made the SOS call on the 20th of July and requested the authorities to provide them a berth on an emergency basis.

The authorities at Port Muhammad Bin Qasim and Manora heard the emergency call.

However, the Karachi Port Trust (KPT) control room did not provide the ship any help.

The ship captain claims that he was notified that the concerned officers were in an ‘important meeting.’