This was disclosed by the SBP (State Bak of Pakistan) in a report released on Thursday. 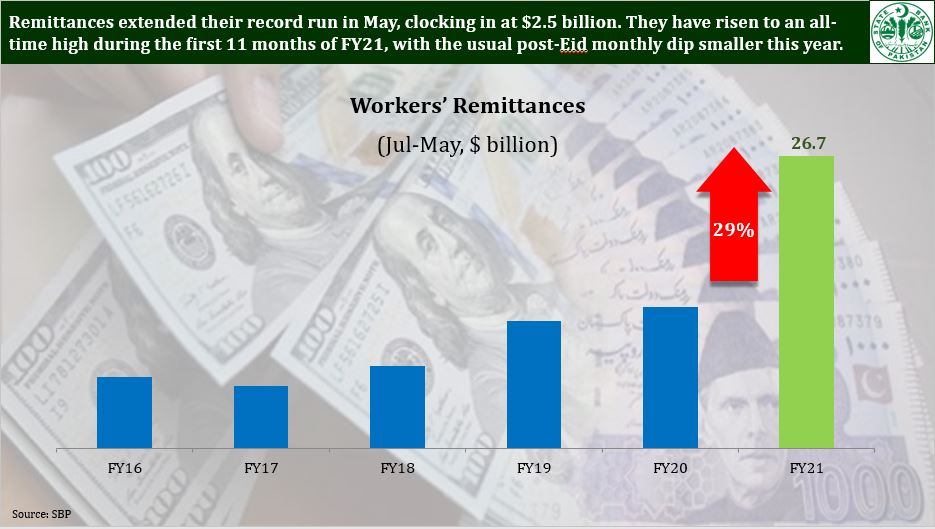 The country recorded almost $2.5 billion of remittances in May 2021, a 29% increase in the current financial year (FY21) as compared to FY20.

This was disclosed by the SBP (State Bak of Pakistan) in a report released on Thursday.

1/2 Remittances extended their record run of above $2bn in May. At $2.5bn, they were up 34% from a year ago. The usual post-Eid monthly dip was also much smaller this year. pic.twitter.com/9z2lmvC2er

The fall was expected as remittances usually slow down in the post-Eid al-Fitr period.

Also, due to the closure of the businesses one week before Eid this year, there was an unusual front-loading of remittances in April 2021.

Nevertheless, the typical post-Eid monthly dip was much more modest this year.

The seasonal decline in May 2021 was less the half of the average decline witnessed during FY16-19.

However, the seasonal decline was the least in FY20, not in FY21. This was due to an unexceptional rise in remittances owing to the easing of COVID-19 lockdowns in the post-Eid period in Gulf Arab states.

On a cumulative basis, the remittances increased to $26.7 billion during July-May FY21.

This amount was 29.4% higher over the same period last year.

From where did the remittances come from in May 2021?

Saudi Arabia accounted for almost a quarter of all of the foreign remittances sent to Pakistan.

A whopping amount of $614.1 million was remitted to the South Asian country from the kingdom.

The UAE was the source of the second-highest remittances sent to Pakistan.

A total amount of $512.4 million was remitted to the South Asian country from the Arab Gulf state. Out of this, the Emirate of Dubai accounted for remittances worth $411.6 million alone.

The other GCC states, apart from the KSA and the UAE, became a source of $261.5 million worth of remittances.

The EU, in total, accounted for $243.6 million worth of remittances.

A further $88.6 million worth of remittances was sent from other countries.