The declaration was signed in the National Assembly of Azerbaijan in Baku.

The Pakistani, Turkish, and Azerbaijani parliament speakers acknowledged the Baku Declaration in a ceremony held at the Azerbaijani National Assembly on Tuesday.

The parliaments of Azerbaijan, Turkey and Pakistan have signed the historic “Baku Declaration”🇦🇿🇹🇷🇵🇰 This declaration serves to further deepen our friendship, brotherhood, relations between our countries, as well as to expand cooperation at the parliamentary level. pic.twitter.com/iS7igIofGW

“I am an asset against terrorism, not a threat,”…

The Pakistani Speaker of the National Assembly, Asad Qaiser, and his Turkish and Azerbaijani counterparts, Mustafa Şentop and Sahiba Gafarova, signed the declaration following a trilateral meeting.

Signed the "Baku Declaration" with @Speaker_Az and @MustafaSentop. The agreement aims to improve further cooperation to promote regional peace & connectivity to achieve desired goals of a prosperous future. pic.twitter.com/kQEKXH9TB4

The joint declaration emphasized broader cooperation between the three Islamic countries based on mutual respect, confidence, and cultural and historical relations.

Pleased to chair the Executive Meeting of the 1st Trilateral Meeting of Parliament Speakers of 🇦🇿 -🇵🇰 -🇹🇷 hosted by Milli Majlis. It is commendable that relations between our brotherly countries are expanding at the parliamentary level as well. #Azerbaijan #Pakistan #Turkiye pic.twitter.com/8S5B9ntlb7

The declaration also affirmed the three Islamic countries’ roles in bringing peace, stability, and development to their regions.

Addressing the Azerbaijani National Assembly, the Pakistani Parliament Speaker, Asad Qaiser, congratulated the people of Azerbaijan for their victory in Nagorno-Karabakh.

Qaiser expressed his pleasure in the trilateral cooperation between the Islamic countries.

The Pakistani Parliament Speaker also expressed his confidence that India will end its illegal occupation of the Indian Illegally Occupied Jammu and Kashmir (IIOJK), similar to Armenia’s retreat from the occupation of the majority of Nagorno-Karabakh.

Meanwhile, the Turkish Parliament Speaker, Mustafa Şentop, addressed the Azerbaijani National Assembly and expressed that Turkey is proud of its relations with Pakistan and Azerbaijan, especially in times of crisis. 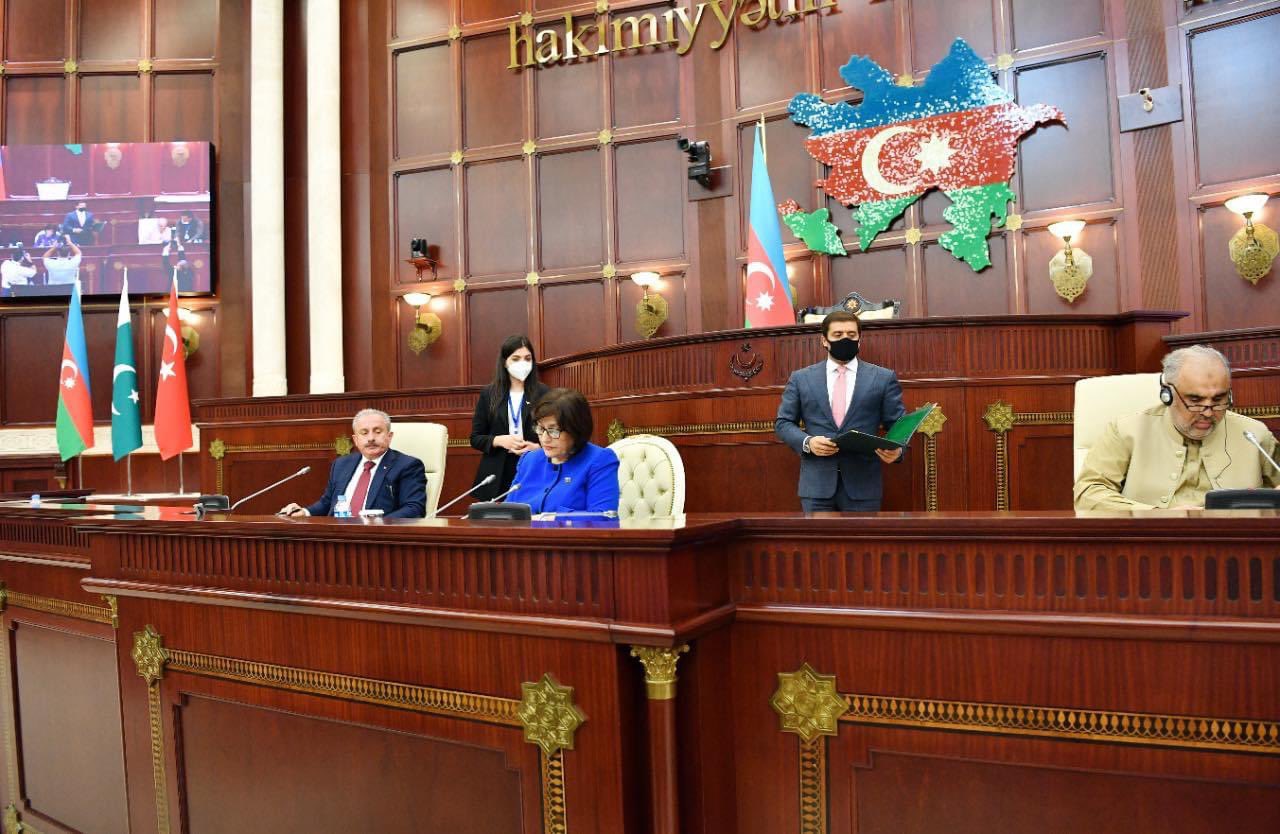 Şentop also congratulated the people of Azerbaijan for their victory in Nagorno-Karabakh.

The Turkish Parliament Speaker also urged the three countries’ parliaments to prepare the institutional grounds to reflect the purpose of the Baku Declaration.

The first trilateral meeting of the Parliament Speakers of 🇦🇿-🇵🇰-🇹🇷 hosted by the Milli Majlis ended with signing of the Baku Declaration. I thank my distinguished colleagues @MustafaSentop and @AsadQaiserPTI for supporting my initiative. #Azerbaijan #Pakistan #Turkiye pic.twitter.com/Tp9MlRaHKC

The Pakistani side highlighted the need to expand cooperation in diverse fields further.
It also proposed to create a Joint Working Group between the Commerce Ministries of both the countries to boost bilateral trade.

I thanked the President for extending continued support on the issue of #IIOJK and invited him to visit Pakistan and address the National Assembly of Pakistan. 2/2 pic.twitter.com/wFaNzmFGKx

Qaiser thanked the Azerbaijani President for his support on the issue of IIOJK and invited him to Pakistan and address the National Assembly of Pakistan.

Next trilateral meeting to be held in Pakistan

During a conference held in the Azerbaijani city of Ganja, Turkish Parliament Speaker Mustafa Şentop revealed that the next meeting between the three fraternal countries would be held in Islamabad in 2022.

Fascinating: ”World’s Whitest Paint” that can eliminate the need for ACs created!