Pakistani B2B e-commerce startup ‘Bazaar’ raises $6.5 million, the largest ever in the country

Bazaar becomes one of the best-funded startups in Pakistan, as its total raise accumulates to $7.8 million after this round.

Bazaar, a new Pakistani B2B e-commerce marketplace, raised $6.5 million in one of the largest seed rounds in Pakistan and the Middle East and North Africa (MENA) region.

I congratulate Bazaar Technologies on successfully raising USD 6.5 million in what is now being termed as one of the region’s larger seed rounds.
This is impressive considering the fact that the startup was founded just 8-months ago by two youngsters at Karachi…1/3 pic.twitter.com/t6CTBaYRIH

…for digitizing of the traditional retail sector in Pakistan. I have always believed in the entrepreneurship of our youth & this speaks volumes about their abilities. I wish them success & urge our young entrepreneurs to emulate this… 2/3

as with a large population base, Pakistan is one of the largest potential e-commerce markets in the world. 3/3

What are pre-seed and seed rounds?

During the “pre-seed round,” the startup does not exist yet. It is just an entrepreneur’s idea. In this round, there is a need for funds to establish the startup.

The next phase is called the “seed round.” Here, the startup is no longer just an idea. In fact, the entrepreneur has established the startup.

In this stage, the entrepreneur’s efforts are focused on raising funds to start production and all processes.

Bazaar becomes one of the best-funded startups in Pakistan, as its total raise accumulates to $7.8 million after this round.

1/ Congrats to @joinbazaar on raising a $6.5M seed round, the second largest ever in MENA and largest in Pakistan, co-led by @Global_Founders founder and @indusvalleycap

The round was lead by Berlin-based Global Founders Capital, making its first investment in Pakistan, and Pakistan-focused VC Indus Valley Capital.

The two companies secured $1.3 million in Bazaar’s pre-seed round in June 2020.

Other investors who joined the round include S7V, Singapore-based Wavemaker Partners, US-based Next Billion Ventures, Saudi-based Derayah Venture Capital, and Alter Global.

4/ What’s super exciting is that so many investors invested in Pakistan for the first time through this deal: Early-stage VC S7V, Singapore-based @Wavemaker_VC, Saudi’s @DerayahVC and US-based NextBillion Ventures

Its angel investors include the former and current executives of Careem, a partner at DST Global (one of the world’s leading late-stage tech investors), and founders of other similar B2B startups, including Egypt’s Maxab, Ula in Indonesia, and Africa’s Sokowatch.

5/ Several top angels also participated including current and former leaders of @careem, a partner at @dst_global (one of the leading late-stage tech investors), and founders of other B2B startups including Cairo-based Maxab, Ula in Indonesia, and Africa’s @Sokowatch

According to MENAbytes data, this seed round was reported to be the second-largest round ever raised by a startup in the MENA region and the largest in Pakistan.

Launched only eight months ago, Bazaar hopes to digitize traditional retail in Pakistan.

6/ Couldn’t be more thrilled to partner with them as they revolutionize the $150B retail industry in Pakistan. Many congrats to @HamzaJawaid @saadjangda and the entire @joinbazaar team on this incredible milestone! I’m so proud of you all and grateful to be part of your journey

The Karachi-based company was founded by Hamza Jawaid and Saad Jangda, former senior executives at McKinsey and Careem, as a mobile-based e-commerce marketplace.

The Bazaar app currently houses over 500 SKUs of branded and unbranded products with the option of free next-day delivery.

Moreover, Bazaar was also able to beat its initial target of serving 800 Karachi retailers by the end of 2020 and close the year with over 10,000 retailers. 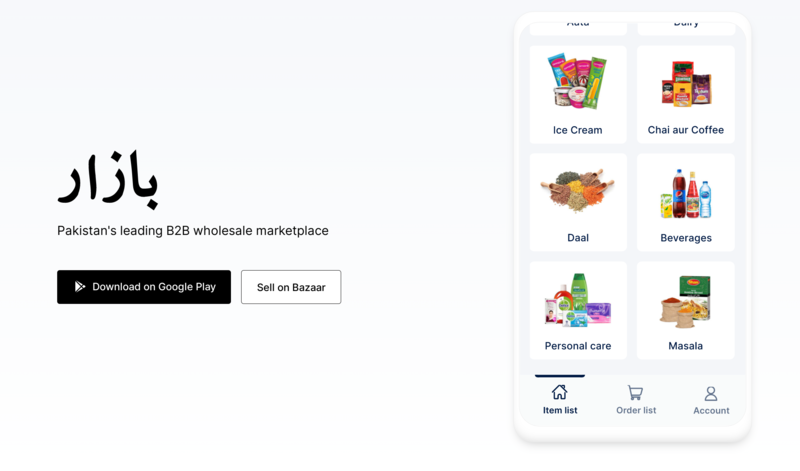 Hamza Jawaid explains that Bazaar has incredible opportunities to empower micro-businesses via technology in Pakistan, which has emerged as the fifth largest globally with rising digital adoption.

In addition to Bazaar’s mobile-based marketplace, it has some other products in the pipeline as well.

The startup hopes to use these new funds to expand its teams and footprint across Pakistan.