Federal Minister for Railways Sheikh Rasheed Ahmed blamed passengers for the train incident in which at least 74 people were killed near Rahim Yar khan.

Federal Minister for Railways Sheikh Rasheed Ahmed blamed passengers for the train incident in which at least 74 people were killed near Rahim Yar khan. However, people all across Pakistan are not happy with the minister’s remarks and blame the entity for its criminal negligence.

On Thursday morning, a gas cylinder of the train, Tezgam that was on its way from Karachi to Rawalpindi exploded, killing hundreds of passengers. Three carriages of the train were destroyed due to fire, two economy class and one business class carriage.

“It isn’t PR’s fault and passengers are to be blamed for it,” the minister said while speaking to journalists after the tragedy left the nation shaken.

“It is unfortunate that passengers take cylinders with them. They don’t fear the law,” he said, adding that several people jumped to their deaths from the burning train.

Statements of railways minter Sheikh Rasheed were not very well received by the people where he promised to have an inquiry about how passengers were able to carry cylinders along with them on a train.

“Be the change you talk about,” journalist Adeel Raja tweeted while urging Prime Minister (PM) Imran Khan to sack the minister.

Sad incident #tezgam but even sadder is Sheikh Rasheed saying the incident which has cost 70 plus lives is due to the people travelling, @ImranKhanPTI time you implement the statement of Britians minister and seek resignation of your minister, Be the change you talk about

Moeed Pirzada, senior journalist and analyst tweeted that there was no firefighting equipment on the train and the staff was not well trained to tackle such critical situations.

Tez Gam Tragedy: Now we are getting the full picture. Amir Hussian of Tabligee Jammat booked two baggies, Railway Staff ignored when they carried "Gas Stoves", no education to understand that "Gas Stoves" on a running train will be dangerous, & no fire fighting capacity on trains https://t.co/c2rr8brIR4

Tez Gam Tragedy: Anatomy of this accident must be understood logically to help prevent future accidents. Public/Passengers not aware that "Gas Stoves" are dangerous on trains. Trains have no auto- equipment (sprinklers) to suppress fires & staff has no training to deal with fires

A short circuit in one of the bogies’ fans caused fire, an eyewitness.

Tablighi Jamaat eye witness on Tezgam contradicts claim of Sheikh Rasheed that Tablighi Jamaat members were responsible for the fire. Says fire caused by short circuit and safety system of the train was completely dysfunctional. pic.twitter.com/cbQzoG9UOE

“The train kept moving even when it was on fire and there were no emergency facilities available inside the train,” the witness said as he blamed PR authorities for not taking complaints of the passengers seriously. 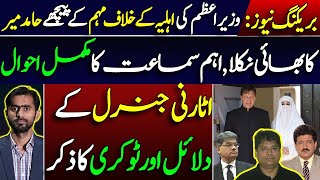