Timeline of strange crime in India: Husband uses ‘snake’ as a murder weapon to kill wife

It was learnt by experts that the cobra does not attack if it is not provoked.

A crime in the Indian state of Kerala has been so bizarre that it has changed the police training curriculum in the state.

This is because the Kerala police have taken extensive steps to recreate a crime scene to prove that a 25-year-old woman was murdered by her husband via a snake.

Sooraj had earlier escaped being convicted as he claimed a random snake bit his wife.

However, the police investigation has proven otherwise.

Here is how these events unfolded:

Sooraj and Utha are married.

Utha sees a viper in her husband’s house.

A viper bites Uthra inside her house, and she is admitted to the hospital.

Uthra gets better and is discharged from the hospital. She leaves for her parent’s house.

Sooraj visits his wife, Uthra, who is recovering at her house.

Uthra’s mother finds her daughter dead in her bed in the morning.

Four people, including Sooraj and the snake catcher, are questioned. Sooraj is later arrested.

The charge sheet against Sooraj is submitted in court.

Sooraj’s parents are arrested on charges of dowry harassment and domestic abuse.

The trial in Uthra’s murder starts.

The trial is completed.

The court finds Sooraj guilty of murdering his wife.

The case is said to be the first case in the Indian state of Kerala, where a live snake was used as a murder weapon. The Kerala police had to use a live cobra on a dummy the exact size of Uthra to prove this. 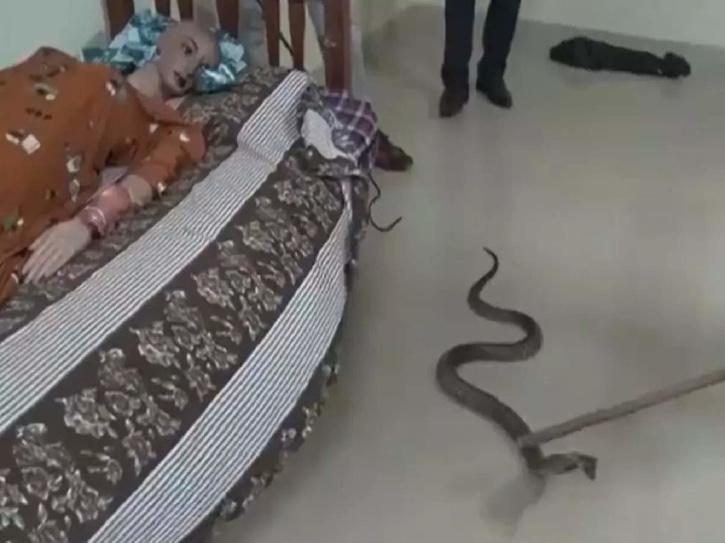 It was learned by experts that the cobra does not attack if it is not provoked.

However, when the cobra was provoked and forced the deep bite mark on the dummy, it was consistent with the bite marks on Uthra’s body.